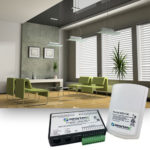 EZIO8SA is a centralized input and output controller, managing incoming signals from up to 7 motion sensors, window/ door sensors and more while providing wired control over 8 small devices itself in addition to its ability to send out INSTEON commands through the PLM.  This puts your input/ output control at the point of need, eliminating wiring nightmares.  You can now use simple sensors like magnetic door contacts to trigger multiple home automation devices at once or use your wireless keypads and remotes to control small electrical loads.

Triggering any of EZIO8SA’s inputs sends out an INSTEON group command, capable of controlling a number of home elements at the same time.  These inputs can be wired to things like magnetic contacts, motion sensors etc. and can also be linked to INSTEON controllers.  So you can broadcast the same INSTEON group command via a connected contact closure or a remote INSTEON signal.  EZIO8SA’s outputs can be wired to small 3A at 120VAC devices and loads.  These outputs may be linked to INSTEON commands, allowing you to control non-INSTEON devices via INSTEON commands.  So EZIO8SA is extremely versatile, allowing you a number of choices for triggering and controlling various devices.

and this is the response…